Task description: This week we have been learning how to use descriptive language in our recounts to add detail. In week five we were lucky enough to go to Rotoroa Island and for our task this week we needed to write a recount. Please check out my recount below.

On a cloudy Thursday morning the teachers and year 5’s, and the helpers went to the hall to get ready for the Rotoroa island trip. When we got to the hall we got our name tags and we used it so the Rotoroa island people could see our names. When we got on the bus it took 30 minutes to get to the pier. We sat down and a dog checked our bags. When the dog was done checking our bags we got a pass and we got on the boat.

When we got onto the boat it was so cool and there was an upper floor and most of the people went up because they thought it was cool but it was really boring up there. When the boat was moving everyone went outside on the deck to see the ocean and most people were staying outside but some people stayed inside. I didn’t see any fish or sea animals but I saw some clouds.

When the boat arrived at the island we walked to the side of the boat and we went up the stairs onto the island. When everyone was on the island we went into this room and everyone sat down on the bench but some people sat on the ground. After everyone sat on the ground the Rotoroa island helpers and Logan’s mother told us about the island. When Logan’s mother was done we went into 3 groups and the groups separated and my group went to the jailhouse first. The jailhouse looked so creepy but we just walked up the hill and down until we arrived at the men’s bay. We saw some birds but I forgot the names. Then we went back up the hill and when we were walking we heard a bird. When we were walking we walked into this forest and we sat down and we heard another bird and the helper that was with us gave some people cards and they read it out loud to the whole group. Then the helper said wanna go through the shortcut or the long way and our group picked a long way but I wanted to go through the shortcut. Then we all stood up and climbed the long way up and my legs hurt but I still had lots of energy and I zoomed through everyone. Then we got to the top of the tallest mountain on Rotoroa and we went down the hill. When we arrived to feed the Takehe and we had to be silent but only two people could go feed the Takehe. Then we went to see some traps that are made for predators on the island and it was so cool. When we finished talking about the traps we went down to eat lunch at the main place but it started raining. When it stopped raining and when we were done eating we played a game where we were crabs and there were 3 situations and we had to pick what we would do to survive and when that was done we walked back to the boat.

When we arrived at the boat we could go to the bowel of the boat or people call it the front and it was so cool and wet there but when we started to move Masen dropped his hat and it sank into the ocean. Then when it started to move the boat’s engine smoked and the boat stopped and most people were scared but then the boat was moving again and it started to rain so we went inside the boat. Then we waited and we arrived back to Auckland. 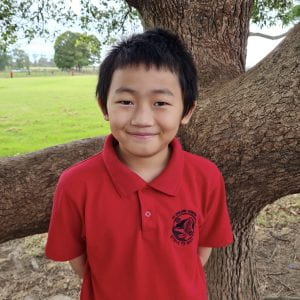